The Founding of the Coalition

The Hungarian American Coalition (HAC) was created in 1991 in response to changing needs at a critical time in Hungarian history. After the miraculously peaceful dissolution of communism, the nation struggled to accommodate economic, political and social change. A number of active Hungarian Americans in the Washington area – predominantly those who had supported the anticommunist opposition in Hungary – recognized both the historic opportunity and the compelling need to create an organization that could identify and promote the interests of the Hungarian American community in the United States. Foremost among those interests was providing assistance to the historic Hungarian minority communities in the Carpathian Basin and helping in the transformation of Hungary into a democratic, free-market society.

In August 1989, after Hungary opened its Western border to East German tourists, events accelerated. In November, to the delight of a mesmerized world, the Berlin Wall fell. At the historic National Roundtable discussions in 1989, Hungarian political parties negotiated a peaceful transition to multi-party democracy. In the spring of 1990, Hungary returned to parliamentary democracy and, in the first free elections since 1945, elected a center-right coalition headed by Prime Minister József Antall. It was at his initiative that the Warsaw Pact was dissolved; Hungary and the rest of Central and Eastern Europe were finally free from all communist military threats.

Back in Washington, the U.S. government responded immediately to the changes in Central Europe by creating hundreds of programs to assist the region’s political and economic transition. It soon became obvious that in order for Hungary to benefit from these programs, there was an urgent need to create a non-profit organization dedicated to providing U.S. officials with timely, dependable information and contacts both in Hungary and the surrounding countries where Hungarian minorities lived.

A group of committed Hungarian American individuals and organizational leaders began serious discussions about how to best fulfill this need. They wanted to build on the effective actions in Washington, D.C. of the young activists of the Hungarian Human Rights Foundation (HHRF) who visited congressional offices, participated in hearings or took part in large demonstrations that called attention to the plight of Hungarian minorities in Romania.

Although individual motivations of some founders were different, in some cases, even conflicting, all participants agreed that it was time to create a new institution to fill the void left by the dissolution of the American Hungarian Federation due to internal conflicts. Over the course of several discussions, the parameters of the new organization were gradually determined.

Sándor Taraszovics, who as manager of the centrally located Center for Hellenic Studies of Harvard University had hosted hundreds of visitors and programs, wanted the new organization to serve this need. Sándor’s priority was to help Hungary overcome the evils of communism that emanated from 40 years of dictatorship. He dreamed of the rapid development of a free and strong Hungary, one that can effectively help minorities in the Carpathian basin.

Zsolt Szekeres was personally one of the strongest supporters of establishing an active presence in the nation’s capital. Yet, as the representative of HHRF in the talks, he relayed the reservations of HHRF leadership, who was wary of creating a new organization that might complicate their mission in Washington.

Árpád Kovács, an engineer working for the Smithsonian Museum, was an ardent proponent of the plan. He was mostly motivated by his vision to build a home for the local Hungarian Scout troop, which had to use rented school basements for their weekly activity.

Frank Koszorús, Jr., the leader of an AMSZ offshoot organization called “American Hungarian Federation of Metropolitan Washington D.C.,” envisioned the creation of a lobbying and coordinating organization to represent the views of the Hungarian American community.

An important planning meeting took place in the summer of 1989 at the Scenic View Lodge in Seven Springs, PA, the home of the William Penn Association (WPA), the second Hungarian fraternal association. Under the leadership of Rev. Imre Bertalan and Elmer Vargo of the William Penn Association, a good cross-section of East Coast and Midwestern organizational leaders attended and advanced the discussion about the structure and mission of the new organization.

Initial plans to create a “congress” were replaced by a “coalition” that would function as an umbrella organization. It would speak only on behalf of its membership, and not the whole Hungarian American community.

The Coalition accepted the generous offer of Szabolcs and Zsolt Szekeres who were not only willing to host the organization on an interim basis in the Washington D.C. offices of Information for Investment Decisions (IID Inc) but also to provide operational and administrative support. The founders made the important decision that individuals as well as organizations could be Coalition members. Both individual and organizational members could be elected to the Board of Directors, and their vote would carry equal weight. This decision turned out to be a wise one, as in the past twenty years, the major part of the Coalition’s operational funding has been provided by individual member-donors, instead of organizations, as had been originally expected.

The Coalition was Born

The Coalition’s Articles of Incorporation were soon drafted by attorneys Frank Koszorús, Jr. and Geza Kadar, Jr., to be unanimously approved later at the Dec. 7, 1991 first Coalition Board Meeting. Sándor Taraszovics suggested that formal registration of the Coalition take place on August 20th, coinciding with St. Stephen’s Day, Hungary’s national holiday honoring the establishment of Hungary as a nation. Thus, the Hungarian American Coalition was registered in Washington, D.C. on August 20, 1991, as a nationwide 501 (c) (3) non-profit organization with the following founding members:

Read more about the Coalition’s history and accomplishments

in our ‘First 20 Years’ publication. 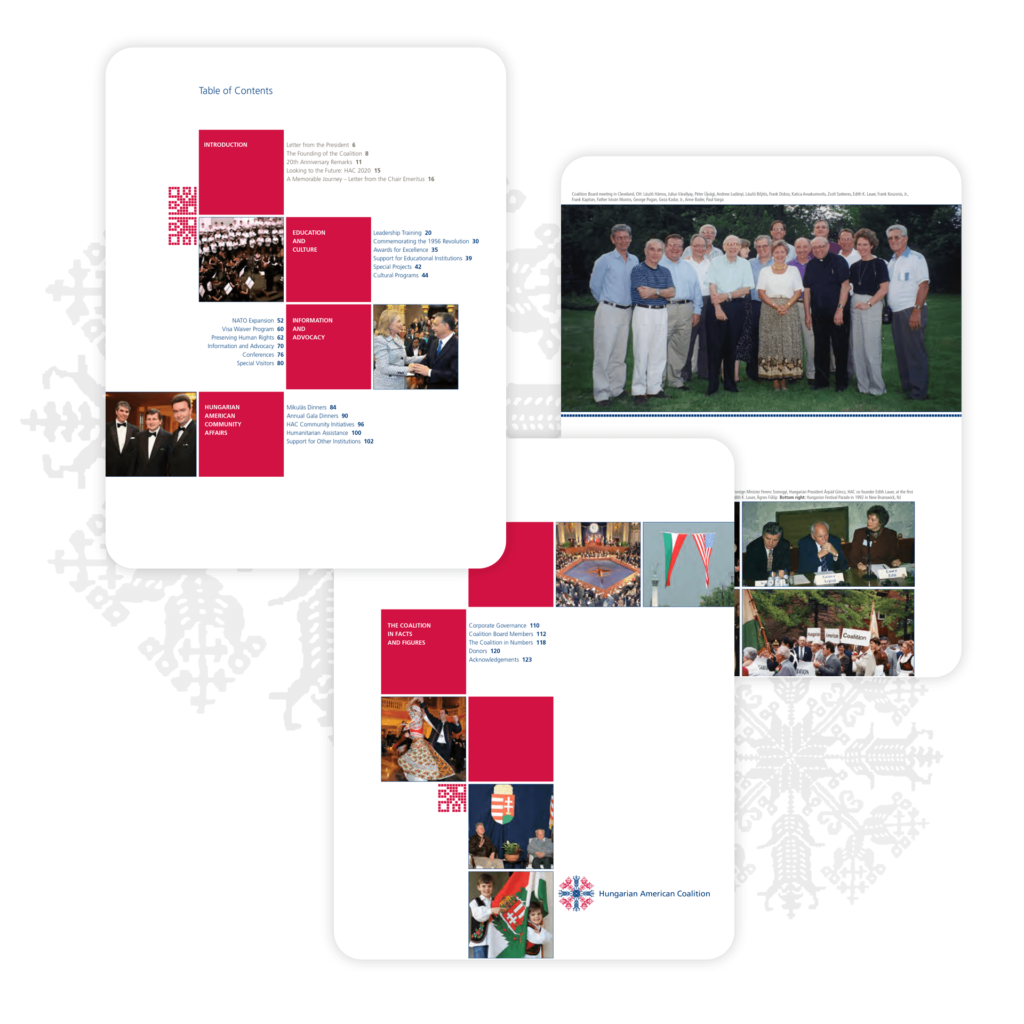